An Aunt by Marriage: Dorothy Walton 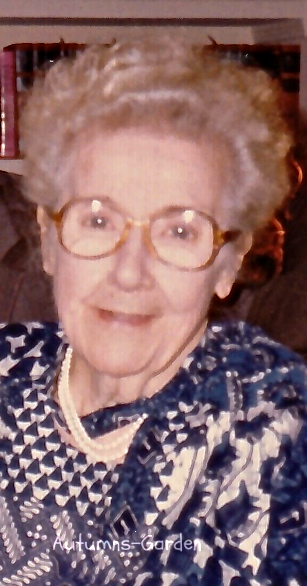 An Aunt by Marriage & A Friend

A Warm and Wonderful Woman

Dorothy Smith Walton (unrelated to the TV Walton’s) always dressed with a flair that was planned and polished. She internalized the glamour of the 1930’s and ‘40’s, but she radiated the informality and warmth of the ‘50’ and ‘60’s. Was she perfect? From my limited exposure I would say pretty much. She set me an example of loyalty, kindness, and unfailing cheerfulness. Our friendship lasted barely twenty years. As she coped with painful disability and old age, these two limitations will never be how I remember her.

She was born on February 12 1898 in Minerva Texas, the eldest of her surviving siblings that included three brothers and three sisters. (C.R., C.L. –“Bill” — Burck, Mildred – “Gail” — Flo and Polly) From conversations with Dorothy, I learned her early years were tough – filled with much heartache but much love. Her father, Roy Edgerton Smith, was unstable and prone to wander. Bu,t her mother, Marion Burck, was a dynamo of ingenuity, holding the family together. She instilled in her children the principles of hard work and loyalty. The Smith kids all did their mother proud – and Dorothy was ever quick to recount and extol their accomplishments, and the undertakings of their children – and grandchildren. Dorothy was a cheerful chronicler and encourager of the Smith family. She had a kind word for everyone, but no words about her father.

Early on, Dorothy had a knack for sewing and she made clothes for her brothers and sisters. She went to work at Neiman Marcus in their bridal department, and her way with a needle impressed Mr. Marcus who helped her gain an apprenticeship in the garment district in New York in the 1920’s. She mastered dress design, and construction, later opening her own shop in Austin, where her mother still lived.

When she met and married her husband, James Walton, she moved to Charlottesville Virginia. Together they restored an 18th century farmhouse in Barboursville, and Dorothy added decoupage to her skills set. She didn’t talk so much of her accomplishments; she demonstrated them.

When I met Dorothy, she was 74. We first met when I drove my soon-to-be mother–in-law Elizabeth to Charlottesville to visit her. Dorothy’s constancy was apparent in this meeting. Although my mother-in-law had been divorced from Dorothy’s brother for more than three decades, she remained Dorothy’s beloved sister-in-law. When Dorothy discussed the failure of this marriage it was with great tact and understanding — she saw both sides and judged neither.

Driving Dorothy back from Charlottesville to Washington, for a stay with her brother, she began the oral history of the Smith family. Oh! How I wish I had a recorder! She was unfailingly complimentary – doting – about Doug, my husband to be.

We visited occasionally over the years. She was one of our first house guests. Our visits were limited primarily by her bouts with rheumatoid arthritis and the Smith predisposition for privacy. While we were waiting for our son Will to arrive, we slipped down to Charlottesville.  Unfortunately, Dorothy felt so bad she was unable to celebrate with us.

Before she moved to California seeking better weather and to be closer to her brother Burck and his wife, Jane, she asked that Doug and I pick up a family heirloom – an enormous walnut wardrobe which collapses to a fraction of its dimensions when assembled.

She told me all about the piece – details I hoped to commit to paper, but never did. It had traveled west by Conestoga and then back east is all I know. When I see it, I remember the weekend Doug and Will and I drove down from Maryland and how it looked in her Charlottesville apartment. Now, when I look at it, I remember how kind a hostess Dorothy was when I invited myself to be her houseguest while Doug went fishing with his Dad. Overcoming reclusiveness and playing hostess at 77 in the summer heat while combating Rheumatoid Arthritis (RA) were a set of skills I did not then appreciate.

She avidly followed the news and read widely and voraciously. Dorothy recounted what she read and her life experiences with vibrant details. She was a great storyteller, and a better listener. When she visited in our home, she loved to sew  and made me a lovely dress, stitching in the zipper by hand.

When we visited her in California, she knew some nifty restaurants and loved going out when she could, or sending us to these places to enjoy them on our own.

She wrote great letters – pages and pages of stories, thoughts, observations and cordial compliments, all committed in her distinctive handwriting to either legal pads, home-made stationary, or cards. And sometimes we would chat on the phone, congenial conversations that always left me with the feeling that I mattered to Dorothy – no distinction of “in-law.”

She had lost her brother Bill in 1979, and her sister Polly around the same time. Flo had died decades earlier from breast cancer. Our last conversation was shortly after her brother C.R. died in April 1990. By then she was no longer in her apartment on Euclid Avenue in Santa Monica. Dorothy was in a nursing home – defeated by the RA and age. Yet, she remained outwardly focused. She died about two weeks later. I knew an “original” had gone.

Dorothy held onto  to life lightly. A father who is unable or unwilling to care for his wife and children, consigning them to poverty can teach that. His absence can also teach a child to be the person they longed for their dad to be: present and loving. For all she had seen and all she could do, Dorothy practiced the gift of making others feel they were important – encouraging us to believe she had no greater pleasure than to be with us in the moment.