A Bee Flew Into a Spider Web

A bee flew into a spider web, and this has no punch line.

Never had I seen such a sight: a bumblebee caught in a nearly invisible gossamer spider web. 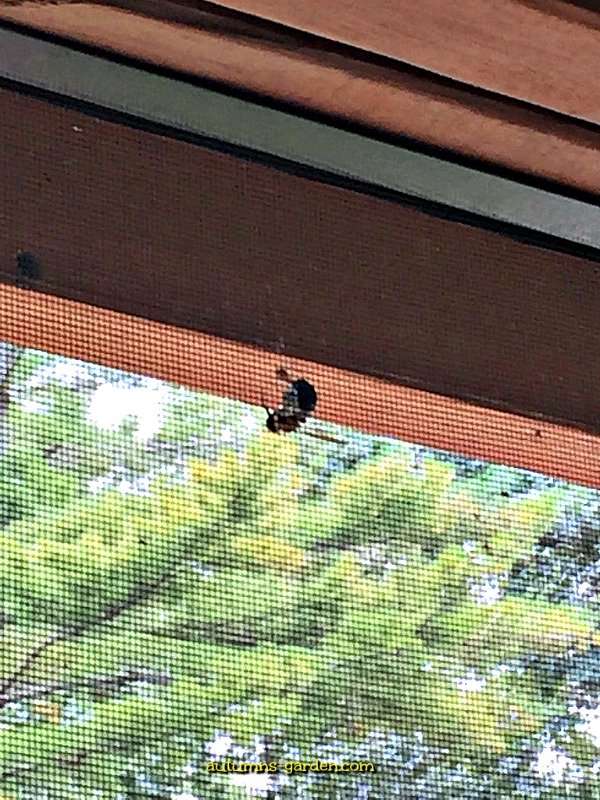 Can you see the spider web?

The spider web was nearly invisible.

The struggle was not. The bee thrashed about as the white spider—1/8 its size—kept trying to subdue it.  Within an hour, the bee lay still, wrapped securely in cords I could not see.

Of the SPIDERS and SCORPIONS, five thousand kinds:
These are scattered abroad, on the sea and the shore,
Quite unpleasant to think of, but still it reminds
To be glad there are not many thousand kinds more.
These are eight-legged beauties, with schemes of their own,
And the safest precaution is:  Leave them alone!
~William Pallister, Poems of Science, 1931*

“Will you walk into my parlour?” said a Spider to a Fly;
“’Tis the prettiest little parlour that ever you did spy…”
~Mary Howitt, “The Spider and the Fly,” 1821*

How good it is then that spiders have enemies, who can hunt them out:

But for the robin and the wren,
A spider would o’ercome a man.
~Isle of Wight Words, compiled by Henry Smith, c. 1870*

When you look at the above photo, the struggle is not as apparent as the short video I took. It’s too grim to reproduce — a frantic flailing against the inevitable.

Why didn’t any of us who watched the death struggle wonderingly just take a broom and knock the thing down – at the beginning of the struggle? (Sliding of Courage)

Fear is the parent of cruelty. ~James Anthony Froude

Sources for Spiders and Spider webs