A Facebook Meme that Goes to the Heart of Our Problem

A popular meme nails self-centered unawareness. Some Americans have no idea what others face, and our kindness quotient is depleting The meme, and its cousins, say plainly:

Be Kind: Everybody you meet is fighting a hard battle you may know nothing about.

That meme is easier for me to understand than the proverb walk a mile in the other person’s moccasins.

Either way though, both simple sentences suggest I should think more about others than I think about myself. “I may not be much; but I am all I think about.” 🙁

Either proverb works well with strangers – like waitresses or check-out clerks.  But I am not so accommodating with strangers on a phone call, usually from India or the Philippines, who answer the help line when some connection in our home breaks.

How easily I forget

Their foreign accent means they speak another language in which I am not fluent. Be Kind: becoming fluent in two languages was a tough battle!

Maybe remembering that they too might have broken connections in their homes that hurt or frustrate them would take the sting out of my words.

By swallowing evil words unsaid, no one has ever harmed his stomach. ~Winston Churchill

That doesn’t sound like much of an antidote for today’s troubles.  But, maybe it’s time for all Americans, especially those seeking higher office, to take a big gulp and swallow their solutions to problems none of us fully grasp – that is, the way some of us use guns and other weapons to solve our problems.

When I was young, I admired clever people. Now that I am old, I admire kind people. ~Abraham Joshua Heschel

Being kind is not rocket science – neither is putting others ahead of myself. Open my ears, Lord, and shut my mouth especially when my words won’t improve silence.

Yep, color me antediluvian. And here’s another blast from the past — a rhyme from my great-grandparent’s time, apropos for an autumns garden, don’t you think?

Kind hearts are the gardens,
Kind thoughts are the roots,
Kind words are the blossoms,
Kind deeds are the fruits.
~19th century rhyme used in primary schools

Or, in plain language:

Don’t be yourself — be someone a little nicer.
~Mignon McLaughlin, The Second Neurotic’s Notebook, 1966

An afterthought for parents of kids who are grown up and who raising their own kids: The Facebook meme also shows me that people closest to me may be fighting battles – many of which I may know nothing about – even though I think I know them well.

When we look into our kids’ faces, can we ever appreciate the battles they face in this tightly wrapped, super sensitive time?

Be Kind – for those we love best fight battles we may not be able to understand. 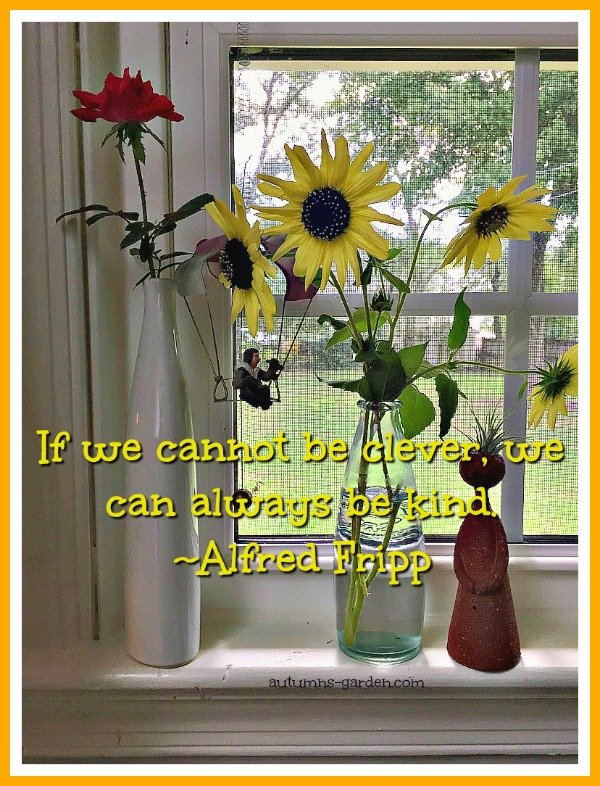