A Mental Mantra for That Unexpected Battle

“Everybody is fighting a battle I know nothing about. Be kind, always.*”

Who knew an autumn’s garden could encompass so many battlefields?

We seasoned citizens are confronting daily skirmishes as our bodies don’t cooperate with our plans.   I am anyway.

Laughter and tears are both responses to frustration and exhaustion. I myself prefer to laugh, since there is less cleaning up to do afterward. ~Kurt Vonnegut

For example, we laugh about my sister in law’s special shirt for chores; she calls her see-food shirt that reveals some of the eating misfortunes she has encountered. Me, too! Unfortunately I wear turtlenecks – food stained cotton knits aren’t funny so funny.

What’s more, color coordinating my outfits gets harder and harder.   That’s the real reason why I am downsizing my clothes’ color palette to neutral tones, usually grays, whites, and black. I always wondered why older European women wear black . . . now, I know: lessens the chance of a color faux pas!

I thought the thread of color in the striped warm wool pants was rust, to complement my orangey red turtleneck. So, I left the house feeling I was pretty well coordinated for a seasoned citizen on a chilly fall day. But in the crisp fall sunshine, I saw the threads were in fact magenta – a color that does not exactly complement orangey red.  But I was oh so autumnally colorful!

The mercy is nobody noticed the clash . . . because everybody I encountered when I was out and about had their own issues.

Or, maybe they decided I was fighting a battle they knew nothing about; so, they were kind. 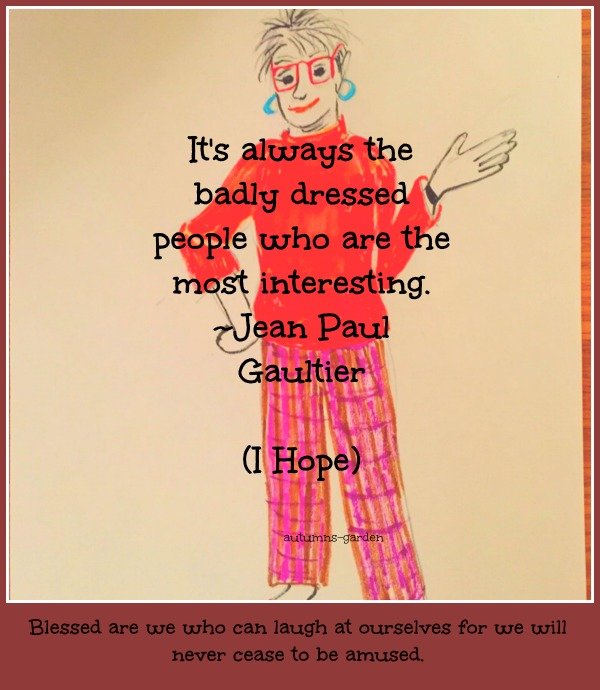 *It has also been wrongly attributed to Plato and Ephrem the Syrian. It is a variant of the Christmas message “Be pitiful, for every man is fighting a hard battle,” written by the Scottish preacher Ian Maclaren (also known as John Watson) in 1897. Be Kind; Everyone You Meet is Fighting a Hard Battle. ~Ian_Maclaren

MORE About that Mental Mantra: A Facebook Meme That Goes to the Heart of our Problems