A Movie About Old Times Has A Message for Today

As we watched the movie, Alone in Berlin, I saw how the oppression of the Nazis coarsened everyday relationships in Berlin.  The way Nazis treated German citizens, both Jewish and non-Jewish, was degrading but effective. So many people became cruel to each other in so many ways – culminating in their terrorizing Jews, who had been friends and neighbors.

But, some Germans resisted and persisted in doing what they could, as they could to show kindness and courage. It was hard – costly.

No, the film is not a religious movie. However, it outlines how Christians can love and serve in times when so many call evil good.

Abortion and euthanasia for our time are ways of “solving” social problems that has coarsened all of us — it is wholly horrific – so bad we have numbed ourselves to what we are doing.

Could abortion and euthanasia  be the fertilizer that feeds our culture’s disregard for human life? 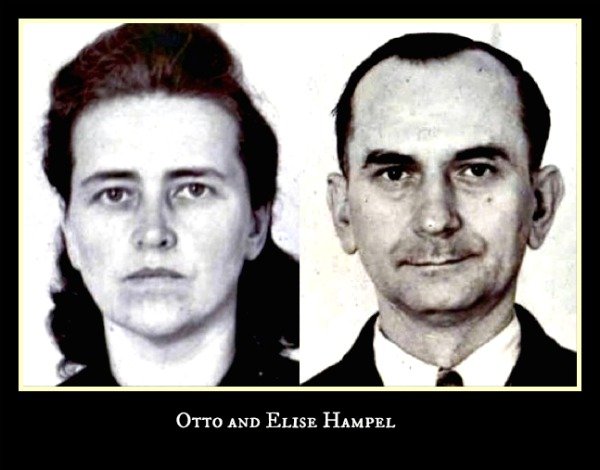 These characters in the movie – real people— the grieving parents and a judge, did a little something each day to inform and make fellow citizens think, ponder and reflect upon all they were seeing and hearing.

They modeled what standing firm might like in different situations. In the movie, one character called it adding more grains of sand hoping to damage the Nazi machine. Another was using his position to fight evil when he could.

If real people living through a real nightmare did their part to wake others up to the appalling viciousness of their time, what can I do?   One thing comes to mind – understand the times, and

Don’t forget God, and do the right thing in all the trials or the good times. (Three Dangers)

The real people who inspired the movie.