Was it a Wart or a Thorn?

When is a Wart Not Wart?

For nearly eighteen months, I thought I had one problem; so did a doctor. Together, we followed a course of treatment. I thought I had a wart on my little old foot, she did too. I tried the home remedies yo no avail; she tried the medical remedies; again to no avail. The protrusion never went away completely.

Another doctor took a look and startled me when she declared that this was no wart – using her powerful light-magnifier, she declared, “There’s a splinter in there!”

That painful hard thingy had something inside! So, she poked, scraped, and pulled out a micro minuscule brown dagger-like splinter – just like thorns on my rose bushes.

When the Wart is a Thorn

How it happened, when it happened, I can’t say – perhaps I was so intent on pruning roses, I just wanted to finish the job before a Texas spring morning heated up, so I ignored its penetration?

I thought that nasty, painful little protrusion on my foot was caused by a virus. But it was a callus, caused by my body’s defense against an irritating invader — a rose thorn. What hurt so was the persistent irritation of a buried rose thorn. 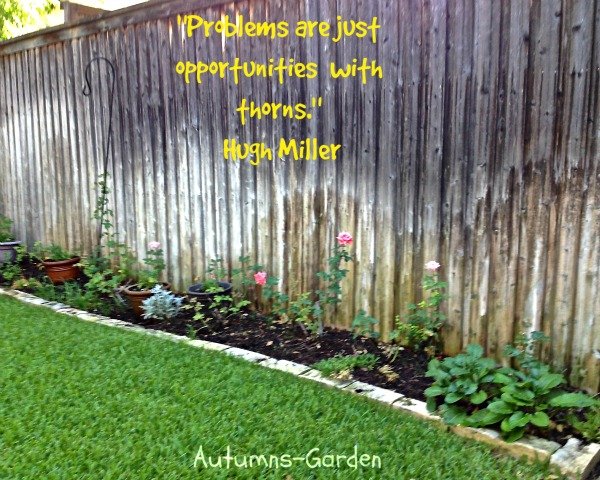 Roses and their thorns

Thank God for that bright magnifying light showing the outline of a nasty culprit, and the eyes and skill of one who spotted it, and removed it – initiating healing!

Another reminder from real-life, getting to the source of a problem isn’t always easy, even for professionals. Especially when we – and they — mistake one problem for another.

I wonder if any other calluses have formed – say, in my mind, where I have assumed I know a matter; or in my heart, where I have mistaken one problem for another.

Could be, I need another Opinion, and a brighter Light.