Americans Have Known Wrong from Right, Even as We Made Bad Law

We Americans have insisted that many wrongs were rights – and we have been so unwilling to admit our perverseness that it took horrific wars to change what could have been changed through legislation. To Lincoln, the Civil War was God’s judgment on the nation (not just the South) for indulging slavery. 1

And we knew what Hitler was doing – but we ignored it, for many reasons, and many Americans, like the German Jews, looked at the evidence, and still said, “This can’t really be happening.” 2 (emphasis added)

Recently, documentation of abortion details is more readily available to Americans than the photographs showing the inhumanity of beaten slaves, and Holocaust sufferers were to our parents and forebears.

A tipping point may have already been reached, however, as people recoil from that which cannot be denied. Where once many could avert our eyes from the details of abortion, the details are now all we see and, thanks to the videos, hear. 3

Fifty-five million Americans have lost their lives – more than the number of Americans who died in the U.S. Civil War, and we are approaching the fatality statistics from World War II. (50-80 million souls–Wiki) The ensuing dialogue by pundits and social media posters has been (predictably) vigorous and sadly, profane.

Millions upon millions of women and men exercised their rights; many regret that, some do not. How do we speak to them? Kindness need not be insipid. (Proverbs 31:26)

Persuading fellow citizens to reject abortion on demand, and the mindset that will not see human life as a divine gift is not a new problem for the Church4 – but it is surely a reason why Americans may experience a form of judgment heretofore unimagined.

Pictures may be worth a thousand words for one simple reason – they do not carry with them the dynamite words can ignite. Therefore, I am letting a picture posted by “Catholic Memes” say simply say we’ve been wrong before, and see the cost: 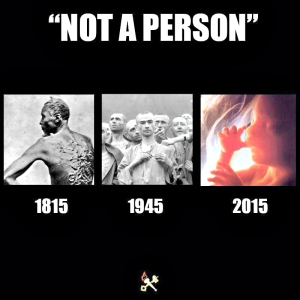 We do not err because truth is difficult to see. It is visible at a glance. We err because this is more comfortable. ~Alexander Solzhenitsyn

Thank you for reading through to the end.

1 God and the Civil War

2 How American Journalist Reported the Rise of Hitler

3The Tipping Point on Planned Parenthood