August –  It’s Dog-Days Can Still Be a Delight 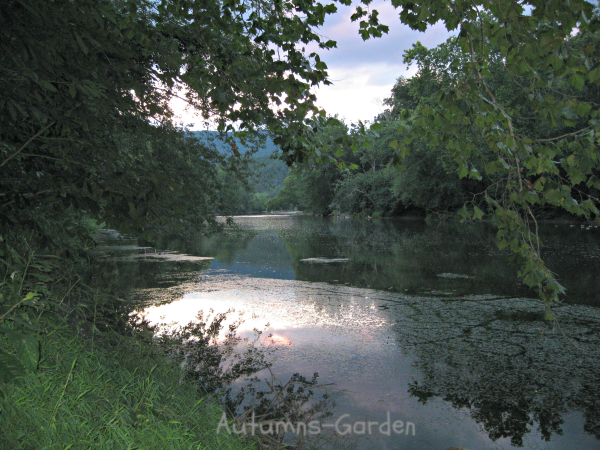 Samuel Taylor Coleridge said of this season, “Summer has set in with its usual severity.”

This year our summer didn’t get severe until August. In Texas August is hot; in Maryland it’s humid. In Maine . . . well, it’s wonderful.  But we aren’t there.

We left the Texas triple digit heat a few weeks ago for Maryland and West Virginia’s lower temps, but higher humidity. By August, soldiering through the heat — as we had the icy cold winter — wasn’t working well for us. Hot weather is as hard on the trees and plants as it is on us – everybody looks a wee bit . . . droopy.

The foliage has been losing its freshness through the month of August, and here and there a yellow leaf shows itself like the first gray hair amidst the locks of a beauty who has seen one season too many . . .  ~Oliver Wendell Holmes

Nothing looks droopy from my current vantage point – a cabin in West Virginia. Summer is aging gracefully in all directions. We are farther into the boonies than I’ve ever been on a vacation: twenty-five minutes from a proper grocery store, no television, and no cell-phone service – but not beyond the Internet.

So, I am somewhat abreast of the news – enough to know that the heartaches, horrors, and the heat have not dissipated.  And that makes the serenity of this holiday even more renewing.

It is a privilege to have time and space just to think.

Last night we walked down to the river – maybe a fifteen-minute stroll, downhill on a gravel road.  That in itself felt like a gift! Being able to simply pause and hear silence and see  — beauty . . . the memory will be quite a souvenir.  God really does leave His fingerprints all over the outdoors . . . remembering the majesty of mountains, rivers, ancient trees, baby fawns may help me see His hands still holding the cities, the Middle East, the unborn babies, and the elderly.

His word keeps in perspective the sight of natural splendor versus the visual horror and hopelessness of several American cities.(This Is My Father’s World)

The walk back up the hill – well that was a gift, too.

The sermon on Sunday was drawn from Matthew 13: 47-58, which focused on the powerlessness of unbelief.  The folks who saw the Lord Jesus do astonishing things chose to take offense at Him, so He did not do many miracles because of their unbelief. “Their character of unbelief became a stopper in their mouth and kept God from pouring out blessings.” (The pastor’s paraphrase of a quote from Augustine)

What might this look like two thousand years after Matthew? The departing late night comic, Jon Stewart summed up what many more Americans, who say they have no religion, believe about God:

“I tend to need logic in my life; I’m very poor with faith. While I do believe in God, I just don’t think he’s still looking out for us. I mean, if you think about it, he created the world in six days—five billion years ago! Don’t you think by now he’s moved on to another project? Maybe we’re just something he threw together for his third-grade science fair.” (The Faith and Cultural Impact of Jon Stewart )

The more things change, the more they stay the same.

Looking out over the swift flowing river, grateful for my little fifteen minutes of heaven, I again choose to believe I am not in charge and God is . . . but I still need help with my unbelief!