Booze Was Not the Best Friend It Promised to Be 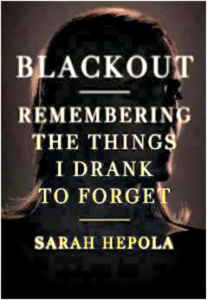 I am not sure Sarah Hepola and I would have been drinking buddies. But I am glad the Dallas Morning News introduced her to me via an interview.

I never liked drinking with friends who might need tending during the times I wanted to drink, no matter how funny or smart, or outrageous they might be. And funny, smart, and outrageous are all good descriptions of this plucky young woman who has remembered hard truths that many of us, who are now members of the social club we didn’t ask to join, should ever forget.

Sarah and I walked down many similar paths, pursuing all the promises alcohol made to both of us, although three decades apart. Her book, Blackout: Remembering Things I Drank to Forget is a gritty account of the downward spiral nobody dreamed of taking. Reading it was a reminder of places I could have gone – or might yet go, if I pick up a drink.

We both drank early and often for many of the same reasons – alcohol might just be a good friend and fun companion. But, we each discovered it wasn’t.

When she described her first taste of alcohol, it resonated; her first taste was at six, from her daddy’s beer and it felt like stardust on her face, lighting a fuse in her that burned for decades. (Blackout, p. 28)

Could something have prevented us from becoming alcoholic? Aside from never picking up a drink, no.

Addiction is a function of two factors: genetics and culture. On both counts, the cards were stacked against me. But still I know, I was the one who played the cards.

There is no single formula that makes a problem drinker. I’ve heard many competing theories. Parents who were too strict, parents who were too lax. A kid who got too much attention, and a kid who didn’t get enough. The reason I drank is because I became certain booze could save me. And I clung to this delusion for 25 years. (P. 194)

She also included an awful character defect we share – drunks are lousy listeners. I too was always more interested in having my glass topped off than in paying attention to the conversation at hand. (p. 133) This sad truth, when it dawned on me, began the countdown to my last drink.

We each eventually stopped drinking for similar reasons — when, as Sarah describes, we realized that the heroine who could drink everybody else under the table was not so fascinating to others, or ourselves. (p. 125) She is so right when she declares: There is something fundamentally wrong about losing the narrative of [one’s] own life. A woman or a man!

What she remembers is funny and horrifying – her storytelling is a narration of nightmares in which more and more women – young women — are caught. Brace yourself for “F-bombs” – etc. Read between the lines, and see the pain – knowing but for God’s grace, you too might be waking up in circumstances that are problematic. Or, that someone you love dearly is as desperate and hurting as Sarah was.

In her words, “ours is a drinking culture disconnected from the dangers of alcohol.” (p. 17) A part of our culture, the church, seems painfully disconnected at times, too – so set on eschewing legalism, and promoting Christian liberty, she sidesteps compassionate recovery counsel. It is discouraging to see how willfully ignorant we appear to remain about alcohol abuse.

In a way her pain is as understandable as the burdens the woman on her way to the well bore. (John 4) That woman didn’t know Who went out of His way to meet her, but like Sarah, she discovered what she put in place of God, consumed her, cratered her, failed her. (p.185-186) And we all put stuff in place of God, all the time!

Being there for the friends and family we love, who are coming to believe a power greater than themselves might restore them to sanity, means understanding where they are. Earning the right to share with love how we have been restored, takes some preparation. So, along with Blackout, here are four other helpers: