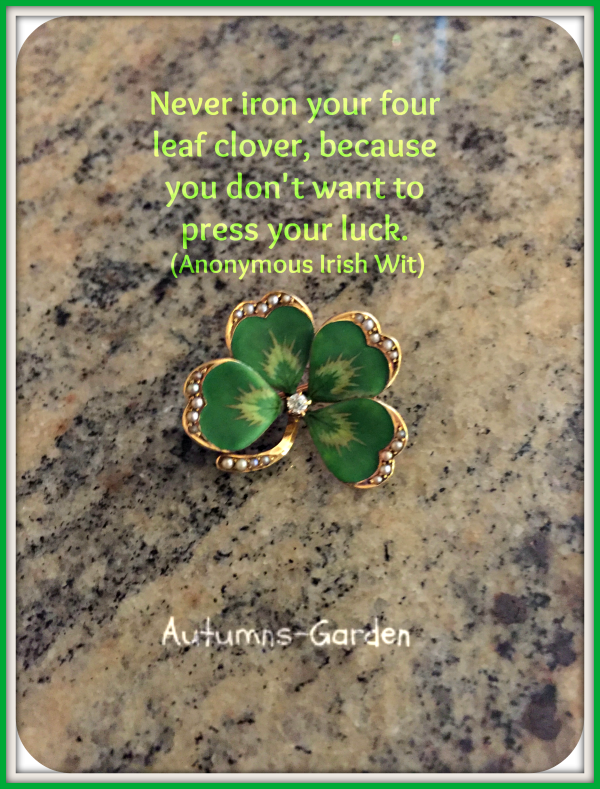 A Day Late — But Still Worth Celebrating!

Whatever part of me is Irish, I am celebrating St. Patrick’s Day, even a day late;  for the Irish have given the unique melting pot that America is, a great flavor! I am a genuine American mixed breed . . . some of this and some of that, with a touch of something else. Some of my relatives arrived in America early, and others, much later. Those who came early may have made it in time to avoid the hangman’s noose, my father joked. Some, who came later, came because of the potato famine and hard times in Ireland in the later 19th and early 20th centuries.

Nobody arrived with much, though. Nor, did they find gold in the hills of South Carolina, or on the streets of Baltimore. Many were not welcomed at first; some faced prejudice; and a few, never fit in. But many, many put together lives that made sense and were productive. Some didn’t.

Ours was not a story-telling family, and I was a poor listener when the stories were told. So any threads of I have of my ancestors’ lives are frayed, and tangled up with snippets from other people’s stories I fear!

When I was growing up in Baltimore, mid-century, I rarely thought about any folks who came before me, or what distinctions made them who they were. I took for granted I emerged from a melting pot of generations of people who were simply American. Who cares where you came from? (Except that mattered to my grandmother, especially when she heard I was dating a Texan.)

All Our Roots, Known and Unknown Are What Makes America Great!

Setting aside the man, St. Patrick’s Day is a time to think about relatives I never really knew who were the seamstresses, milliners, maids, door-men, farmers and factory workers who came to Baltimore and South Carolina so their kids and grandkids could become college graduates. On this day, everybody can be Irish, remembering roots we don’t even realize we have. We all are immigrants – even our American Indians! Who KNEW?

Even the day after March 17 is a good day to be celebrating the melting pot we have been, and the Lord willing, will remain. Every day is! So, too, is making sure we make our kids proud, and their kids as well.

Happy St. Paddy’s Day to you and yours!

May your blessings outnumber
The shamrocks that grow,
And may trouble avoid you
Wherever you go.
~Irish Blessing