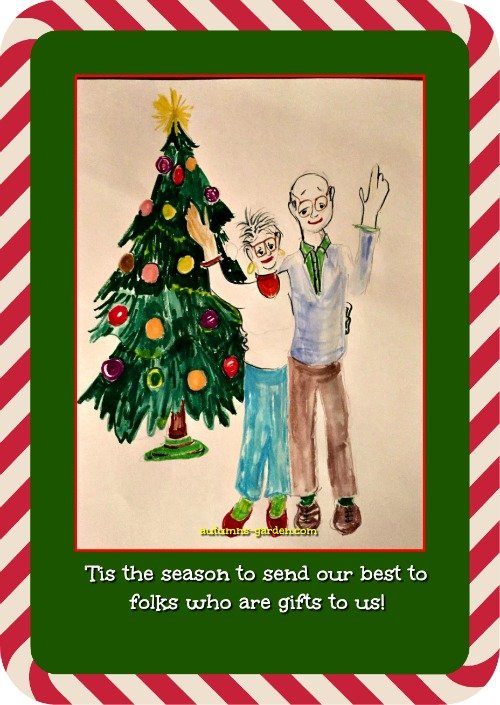 If the camera adds five pounds, than the trusty watercolor brush takes off seven.   One of the prerogatives of artistic license, right?

Anyway, I am enjoying one of the perks of the season.

Is it not overwhelmingly beautiful?

I am grateful that the public radio stations in our area have organized so many fine programs, with so extensive a range of music and artists; public TV, too.

John Rutter, among many, was a contributor, and many scholars, musicians and performers.  Through their commentary, and from the dramatization of key moments in Handel’s life, I learned about the pain and personal suffering from which Handel’s Messiah emerged.

Who knew such a universally acclaimed masterpiece of redemptive splendor could come from such failure and anguish?

The composer, the librettist, and a soloist’s troubles, depression and sorrow surely were instruments in God’s Hand for His glory and their good!

The debut performance of Messiah in Dublin, Ireland in 1742 was a turning point for George Handel. It was also a turning point for Charles Jennens, the man who wrote the libretto for the oratorio, and Susannah Cibber, a formerly-scorned actress/singer who regained her standing within the theater after performing her solo. Handel’s Messiah is an inspiring story of redemption. The message and the music is pertinent to all generations, regardless of personal beliefs.

Also, I did not know that an early production of Handel’s Messiah, although performed at no charge, took up contributions to release people in debtors’ prisons. (A fearful possibility for Handel, should this collaboration fail!)

The show’s dramatization of how so many debtors were freed, stumbling out of their dark cells into daylight to learn their debts were paid in full, because of the collections taken at the performances, was the most eloquent portrait of the Gospel hope I have ever seen.

Whew – I could so see myself – released from the cells into which I have stumbled, with the hope of freedom I could never buy! The Hallelujah chorus  has never sounded so sweet— Nor, has He was Despised or Surely He Has Borne our Griefs been more personal.

So, on this Christmas Eve, 2019, dear reader, I hope you will hear HOPE in fresh ways if you listen to Handel’s Messiah. For Unto Us a Child is Born!

His name is Jesus, for He shall save His people from their sins.

This Christmas Eve, I have a new regard for Handel’s Messiah, God’s word in music, and the hope of good news for poor ornery critters like thee and like me!

If , dear one, you still feel locked up and locked into painful problems – may I share a mediation on Psalm 88? ~ How to Deal with Dark Times, a sermon by Tim Keller

PS: Just so you know: those Wise men didn’t show up on Christmas Eve — so, they can’t be in my Nativity scene. I separated them with a boxwood tree!