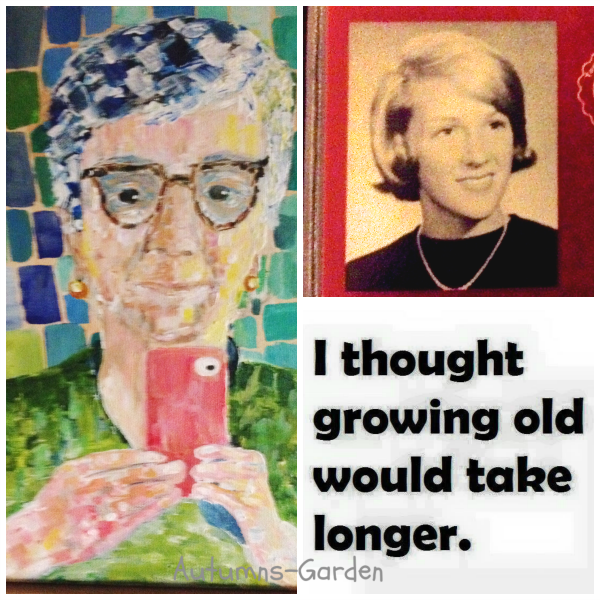 Blue Hair Granny with an Apple

Three separate conversations in the past month confirmed what my mirror confides daily: my hair is really white!   Since Miss Clairol and I have parted ways, I have enjoyed a degree of freedom from bi-weekly touchups – and my hair has freely become quite white – so white that its color – or absence of color — generated three similar comments, concluding with: but of course your hair looks great!

The first conversation was a casual one amongst acquaintances at a holiday party . . . it began with banter about the advisability and cost of remaining blonde . . . rather than going gray. I just kept nodding and smiling, so aware that I passed gray hair years ago, and that fact seemed to dawn slowly on both my co-conversationalists mid-point in their chat.

Both quickly complimented me on my hair however . . . mercifully, the hubbub of the party made parting possible. Awkward . . . .

The next time my hair became an uncomfortable topic of conversation began in the coffee aisle of our local grocer. An elegant woman, a wee bit older than I, with shoulder length, well-coiffed sandy blonde hair, began a conversation on the store’s diminishing selection of favorite coffee brands. As we chatted, she commented on my hair – wishing she could carry off white hair because her colorist’s bills were becoming excessive.

Well, how do I answer that?

Yep, that tied my tongue in knots!

But on she went, describing her annoyance and her search for a new colorist. Just before Doug appeared in the aisle, she said she was glad I was able to carry off such a natural look.

What did that mean?

The third conversation happened as I rounded the corner of an aisle in another local grocer; the manager and clerk greeted me, asking if I was finding everything; then he did a small double take, and remarked on my white hair — very spiffy he said. He can’t wait for his hair to turn . .  I moved on, hoping not to hear the end of that sentence.

Three chats about how natural my white hair looks, in one month, convinces me, my mirror is reflecting an accurate assessment of both my age and stage . . . I am a  cute white-haired old lady! (not little)

I am just glad for crazy conversations and the good laughs they gave! (My Mind Versus My Mirror)

How about you dear reader? Have you had funny conversations confirming your mirror’s reflections?

Two things you discover when you’re older and wiser — you’re not actually any wiser, and behind the wrinkles, you’re not any older, either. ~ Robert Brault