Driving safety may be the elephant in the room for families of seasoned citizens. We need to assess our capabilities before the accidents – not after.

Recently I was with friends who  are feeling as  much angst over their aging parents driving safety as they did over their teenagers’. They described how one parent was a dangerously distracted driver, and the other a road rage warrior. And neither parent will admit their infirmities; nor will they heed advice about driving safety.

An accident may be the only thing that convinces them to stop driving, my younger friend lamented.

While I nodded sympathetically, I winced inwardly realizing that barely a decade separates me from their parents’ age!

Taking away the car keys was a mixed bag in our families.

My grandmother never had to hand over her keys—she never drove or even owned a car.  But, my great aunt Essie’s kids had a huge fight wrestling away the keys to her model T! A pernicious eye condition took my mother’s keys from her; but an episode of distracted driving convinced my aunt to hand in her keys.

Doug persuaded his mom to relinquish her keys by appealing to her compassion and common sense.  A traffic accident can do way more than dent a few fenders.

Being able to hop in the car and go is a super tonic, and one that I would be loathe to surrender. Whew . . . that’s something to think about – having the person whose diapers you changed ask you turn over the keys to your car. 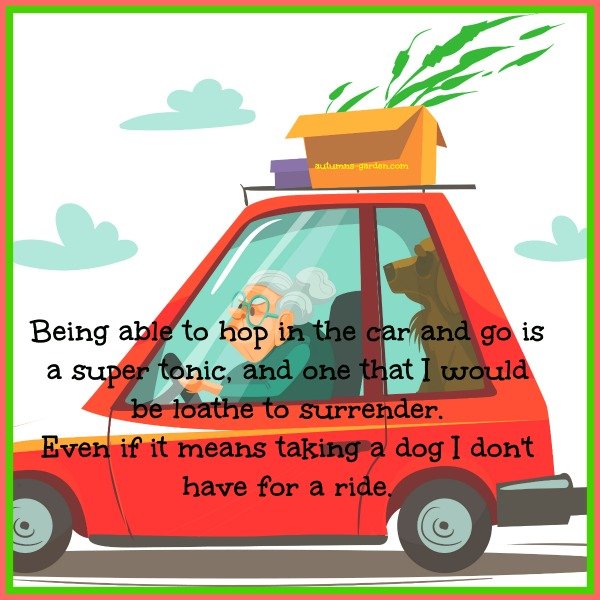 All the healthy eating and robust exercise can’t prevent the wear and tear life brings to bear on my response time, sight and hearing, and my distractibility.  Adjusting my attitude to changes that age brings was nothing I ever thought about until age brought some changes!

When I arrived to the magical decade that is not the new sixty, sidewalk curbs, and steps changed my prayer life.  (Remember: Someday is not a day of the week.)

Hence, there are a few more perils in old age maturity than sidewalk curbs and steps.

Derek Prime warns that pretending old age isn’t creeping up on us is puts us in danger of making several mistakes.  Those mistakes –comparing the present with the past, mistrust, pessimism, and self-pity can – can run off friends and family.  (A Good Old Age, page 8-9)

Today, I think I have my wits about me. But age is a devious companion; robbing me sometimes of the common sense, courtesy, and compassion, I wish others had.

Since Doug won’t spring for a Lincoln Town Car and a driver, it’s as important to pay attention to changes in my sight, hearing, pain levels, and balance as it is to the scales.

And be as willing to take advice as I am to give it.

That’s not exactly my strong suit.

God help me be an example – and not a cautionary tale.

Don’t let me harden my heart to Your voice speaking through counsel I might not want to hear.  ~ Tools to keep a soft heart.