Growing Up is a Trap — Growing Old Needn’t Be 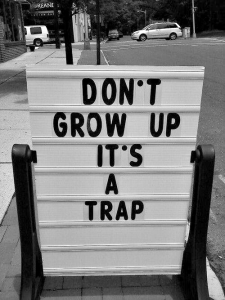 I was told I looked older than I was when I was growing up. Maybe it was a ploy to get me to behave myself; maybe I really did look older. Either way, I couldn’t wait to be older! Being older meant being in charge . . . being the boss of me.

Not that I ever stopped to think how much work that might be.

No, I rushed forward – embracing all I imagined being older might be — based on how I observed other “older” people lived. (Old was 30-something!) When I was young, watching others, I thought I could do just about anything, wondering, How hard could that be?

I wondered how hard could driving be. When I got behind the wheel of a car at age 15, and tried driving around a private island in Maryland, I found out. It’s altogether inexplicable that I did not injure someone else, the car, or myself! Somewhere, I think my guardian angel knows the full story!

When I was older, and licensed to drive, I again never considered how hard could it be to drive on super highways in a state I’d never been when I volunteered to return the rental car on a business trip to California. I hopped blithely into a rental car, wondering how hard could it be to drive from San Bernardino to Redondo Beach CA – I’d just follow the signs, right? That same angel probably knows just how we made that trip . . . without any GPS or map!

Being even older, I’ve come to see the question, How hard could it be? may not be the best one to ask entering the season, the one after autumn, that Shakespeare described:

. . . Last scene of all,
That ends this strange eventful history,
Is second childishness and mere oblivion,
Sans teeth, sans eyes, sans taste, sans everything. (All the world’s a stage . . . )

Or, a less delicate appraisal of the golden years:

“Man is conceived in sin and born in corruption and he passeth from the stink of the didie to the stench of the shroud. . .” ― Robert Penn Warren, (All The King’s Men)

It’s easier to swallow what my mother and mother-in-law reported: There’s a lot of brass in the golden years – and Old age isn’t for sissies.

Yet, here we are – if we have a pulse, Paul (Newman) said we have a purpose! For those of us who are blessed to be here this good day – and who hope to enjoy more — living well is more than imitation and dumb luck.

As many blessings we have, our prospects may include is what the Lord said to Peter:

. . . When you were young you dressed yourself and went wherever you wished, but when you get old you’ll have to stretch out your hands while someone else dresses you and takes you where you don’t want to go . . . (John 21:18)

Ah, gentle reader, are you having trouble embracing a journey where you don’t want to go?

Living well each day is a day of surrender, laying down my battle gear, and accepting the Lord’s armor. I’ve watched others do it . . . How hard can it be?

Elizabeth Elliot showed me . . . so did Kara Tippetts.

My mother left an example; as did my mother-in-law, and my sweet ‘n salty aunt Virginia, and her daughter, my cousin Karen. My friend Barbara Black also died fully shielded in God’s gear; so have others I’ve known. None ever made the final days look easy, but in their unique ways, they took the terror out of aging, illness, and death.

However, a few folks I watched seemed to keep on their own armor, making the last leg of their journey appear so hard. I want to avoid their examples! (1 Corinthians 10:11)

Today, I have time to prepare for tomorrow’s adventures, Lord willing. I know my protective gear can’t keep out what life may have planned – nor what the Lord may permit. So, thank you for the folks who showed me that love, joy, peace, patience, kindness, goodness, faithfulness, gentleness, and self-control is a fruit that sustains courage, especially in the dark.

Old age isn’t as easy as some make it look – today is a good day to practice what I think looks hard – walking with God, working as He enables, and resting in His abundance.   And avoid what I can slide into too easily!

“If there is the tiniest grudge in your mind against anyone…your spiritual penetration into the knowledge of God stops.”   Oswald Chambers

“Nothing on earth consumes a man more quickly than resentment.” Friedrich Nietzsche

PS: No, I never told either of our kids those driving stories! And I would appreciate your keeping this to yourself.