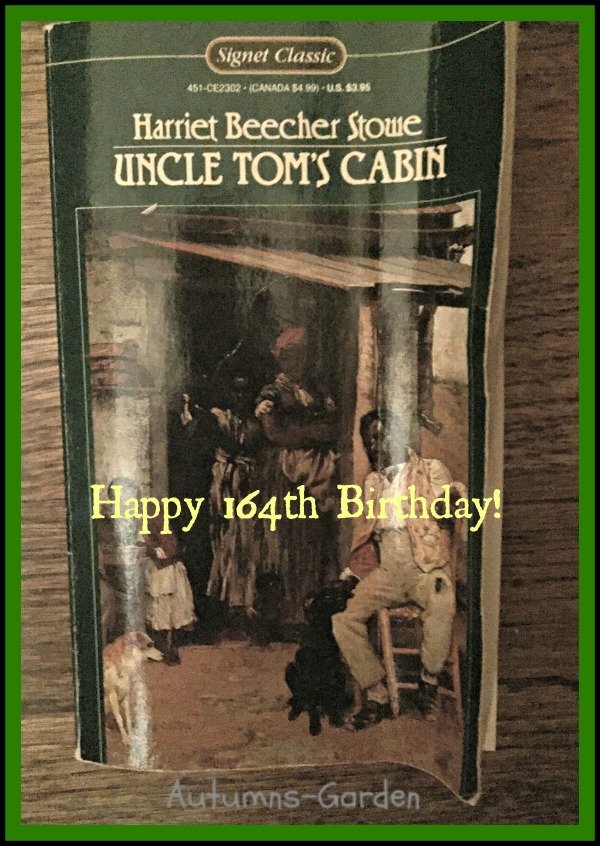 No, This Copy is Not That Old!

Uncle Tom’s Cabin was a book I avoided, believing what I had heard – over-blown emotional soap opera, filled with ineffective social arguments that misrepresented the institution of slavery and the cost to the nation, and those who were enslaved. Nor was it ever recommended as an American novel worth reading in high school or in college. But when I came face to face with the novel Abraham Lincoln said sparked the American Civil War in the museum shop at the battlefield in Vicksburg, I figured maybe it was time to read Uncle Tom’s Cabin.

I bought it – and found out

But it’s rare to find admirers today – so I am happy to wish Happy Birthday to a grand old novel, and recommend it to any reluctant readers.

Mrs. Stowe wrote Uncle Tom’s Cabin soon after passage of Fugitive Slave Act of 1850, which granted Southerners the right to pursue fugitive slaves into free states. This law aroused many abolitionists to action – and writing.

After Mrs. Stowe became acclaimed, at one point she asserted she did not write Uncle Tom’s Cabin; God wrote it, and she served merely as His instrument.

President Lincoln read it before announcing the Emancipation Proclamation in 1862.

How could the novel that Abraham Lincoln described as having “made this great war,” lose its vast audience?

Readers may avoid her work today because we are more familiar with its caricature then we are with her novel. In the late 1800s, crude traveling shows adulterated Mrs. Stowe’s themes called “Tom Shows” that were racist burlesques of her carefully drawn characters and their ordeals. Event the grand musical The King and I rendered the novel no favor.

Uncle Tom’s Cabin (or, Life Among the Lowly) is a graphic tale of many lives bruised and crushed by slavery — both blacks and whites. People who deride the character of Uncle Tom, either haven’t read it, or don’t understand the power of God to transform. Consider how Mrs. Stowe presents Tom: he is a man of strength and moral nerve. Read how Tom saw his life as Simon Legree paused in the midst of a deadly beating:

Tom looked up to his master, and answered, `Mas’r, if you was sick, or in trouble, or dying, and I could save ye, I’d give ye my heart’s blood; and, if taking every drop of blood in this poor old body would save your precious soul, I’d give ’em freely, as the Lord gave his for me. O, Mas’r! don’t bring this great sin on your soul! It will hurt you more than ‘t will me! Do the worst ye can, my troubles’ll be over soon; but, if ye don’t repent, yours won’t never end!’

Uncle Tom’s Cabin is both a good read and an important document of history — an illuminating companion to any study of the Civil War. It is one of the most influential books written, and is a useful guide to understanding how the exploitation of one generation continues to afflict us today.

Happy Birthday 164th Uncle Tom’s Cabin – and many, many more!