History repeats itself
has to
nobody listens ~ Steve Turner

As a former tour guide in Annapolis, watching the intrigues, murder and mayhem that flowed from one small colonial city, Setauket, New York, I realize how little I  know of my country’s colonial or revolutionary war history.

Because TURN is visual historical fiction, I see how rebellion and war stain our character, and confound our consciences. War is hell, even when it is our only choice. War plunges some people into choices they never imagined making.

What We Know, But Can’t Know

Coming to know the reasons why people made the choices they did, well, that’s as essential as it is often impossible to know!

Seeing how the character of George Washington is portrayed in this series, makes the historical loss of his letters and papers that Martha burned when he died greater.   But if we had all his diaries, letters, and communiqués – or, everybody’s papers – would what we learned from studying them be enough to keep us from future folly?

Current events suggest we are about fourteen minutes away from trouble George Washington and King George III could not have imagined. Yet, a thousand or so years before these mighty men lived, Israel had been warned big troubles were coming.

Ancient Israel’s woes, and the nations surrounding them sound like troubles Americans have known, and the church knows. (Isaiah 1) No, 21st century America is not whom the prophet had in mind when he wrote; but the 21st century church is.

The Lord appealed to them, and us through the prophet: Use your mind, open your heart and trust Me. (Isaiah 1:18-19)

Willingness to surrender to Lord, may be simple; but it isn’t easy – even as we stare at a mountain load of losses.

Leaning on those Everlasting Arms is easier said than done; but history shows running into Them is better than falling down. (Isaiah 65)

Humility is the ultimate act of sanity and serenity in a world we cannot control. As much as we want to control the evil we find in the world, we cannot succeed in our own power, because evil lies within each of us. Timothy W. Massaro 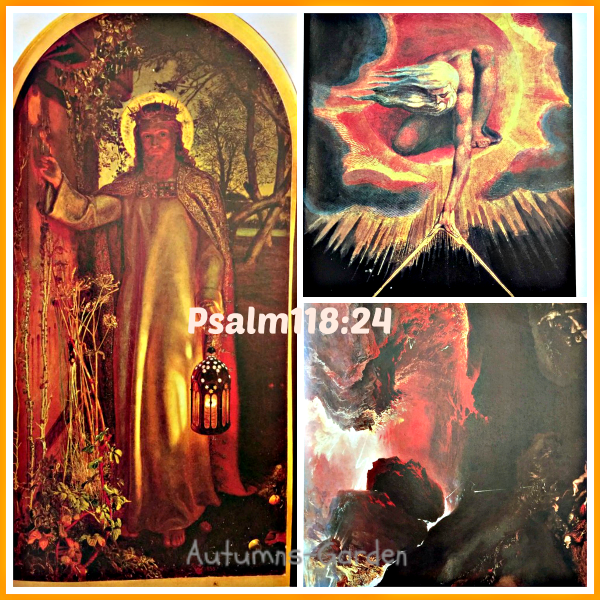 Left Panel: The Light of the World by Holman Hunt, Keble Collage, Oxford

Bottom Right: The Great Day of His Wrath by John Martin, Tate Gallery