Hearing a Hit and Run 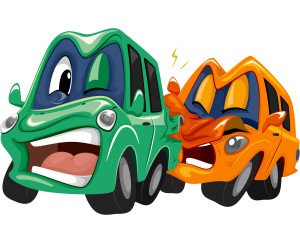 I heard its yell!

Hearing a HIT and Run is scary.

The sound is unmistakable – metal yelling as if in pain. And last night we heard the unmistakable sound as a small white car’s right front slammed into a black small car’s left rear bumper – perhaps at 15-20 mph.

Then – almost as quickly as the driver had collided with the car — she or he maneuvered past the damage and disappeared across the intersection as the red light stopped all the other drivers at the busy intersection.

No, I didn’t get a license plate – but when the flow of traffic carried us off with a green light, I turned and saw that black car ‘s driver had pulled around to a parking lot, and now the car’s entire left rear side seemed to be flapping — a wholly dismaying sight.

I thought of that driver – their car looked new; the prospect of getting all that attends a “fender-bender” sorted out made me shake my head in wonder that so much damage could have happened so quickly, and no one apparently willing to own to their part.

Then, I thought of that hit and run driver, so careless, irresponsible.

As I was about to wax self-righteous, I thought about the hit and runs to which I have been party – not with a car – but with my mouth, or heart, or habits. I have landed some serious blows in my time, and never owned up to my part in causing damage – way more times than I have sustained harm.

I hope that hit and run driver can come to terms quickly with their costly carelessness – I know that the weight of guilt is wearying.

Easter isn’t wholly in my rear-view mirror. It shines an unavoidable light on my dark places. For all the confection and cuteness that attend the loveliness with which the Sunday celebration comes, its meaning, Christ’s resurrection from the execution I deserved, is heavy.

Remember the Damage I have Done . . . Do

Last night I saw the cost of carelessness and contempt, reminding me that someone’s suffering is real and expensive. And if I can’t say I am sorry to the people I’ve harmed, never let me forget to say I am sorry to God for the harm I have done, and thank Him for the gift of His Son, so that I, the one culpable for His sorrows, am freed from its penalty.