Hokey But Oh So Helpful

A veteran of the late 1960’s cultural wars, at first I thought his programming was hokey. Back then I liked Sesame Street’s humor and the Electric Company’s verve better than the calm of Mr. Rogers’ Neighborhood.

Initially when I watched the little vignettes I thought Life is never that easy, Fred.

However, in time I realized that Fred Rogers had figured out how to talk about tough issues that had been – still are — troubling me.  (Like prejudice, disability, hurts and disappointing experiences)

Consequently, as I have gotten to know his work through articles like the one cited below and YouTube, I realize his “slow-motion” conversations were not all so smarmy. Humor and verve, while each a good response to trouble, aren’t always enough in an autumn’s garden.

Maybe because as I am moving more slowly, with fewer responsibilities, and a growing fear of dependence, I hear his compassionate interest as I couldn’t thirty-five or forty years ago.

All the joys of maturity are not fun topics!

They are elephants in the room from which we tend to avert our eyes. We often do not know how to talk about what often feels like it is overtaking us.  Here’s where a Mr. Rogers could help us sort through fears.

A trustworthy, predictable, curious, compassionate friendship or two  — like a Mr. Rogers – can enhance my garden. Somebody who can 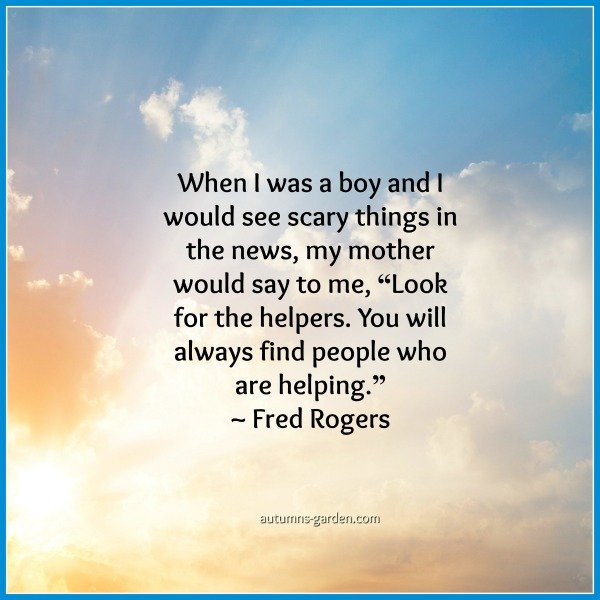 No, back then, I was not a fan of the hokey Mr. Rogers at first when our kids were growing up. Don’t judge. I am now; especially as I read  A Beautiful Day in the Neighborhood: Why Emulating Fred Rogers is So Compelling Today

Even when things seem bleakest, God’s grace is still an active force in our lives and world. (Reading Buechner, Jeffrey Munroe, page 13)

Quote for the day: “When God put a calling on your life, He already factored in your stupidity. — Most comforting thing I ever heard.” (Not the Former Things)