A Hurricane, Missiles, and More Clutter

Harvey hit Texas in a vulnerable week for our nation. We had been squabbling amongst ourselves, and digesting the news of North Korea’s missile launches.

Listen to the lessons of Harvey.
Let the storm remind you of the value of relationships, people, and most of all, the promise of heaven. ~ Max Lucado

Since that storm, Americans have shown Americans glimpses of grit and grace.

I felt like my heart was washed and renewed with my tears for so many who are suffering so much — and not just our country!

Also, last week our daughter delivered several small boxes of stuff we had squirreled away in her attic when we relocated to Dallas. (Coincidence? I think not!) As I start the next round of decluttereing the pictures of Harvey’s devastation prod me: Put it to use, share it or toss.

Images of folks leaving their possessions floating in water are potent. 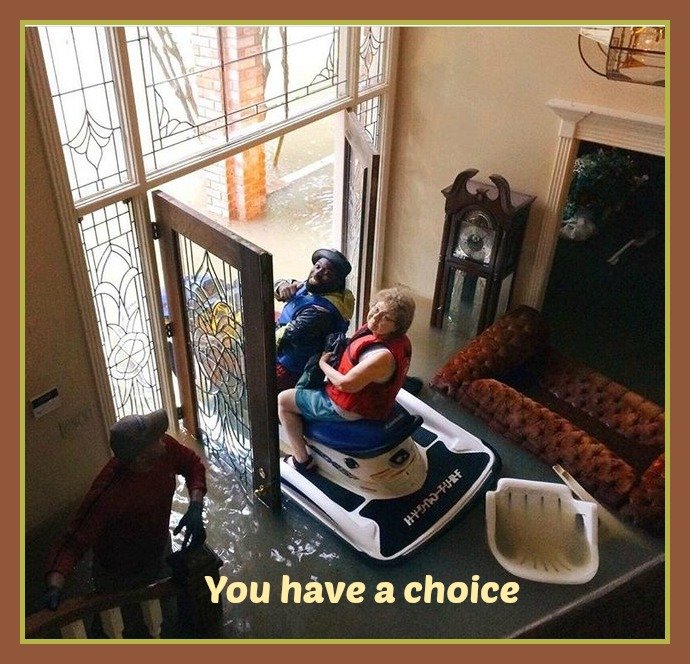 Leaving behind our stuff to save our lives*

The three lessons from Harvey that Max Lucado outlined have been true and they have been life-long in my memory banks – from the Oklahoma city bombing to Columbine and then to 9/11; the 2004 tsunami through Katrina and Sandy to Sandy Hook. (to name a few)

Lesson #2 – We really are in this together.

Lesson # 3 – This world doesn’t work but the next one will.

Those rescued have said they had to make a decision fast: get in the rescue boat, or on jet ski, now, or risk drowning in the murky rising water.

In this week’s worrisome headlines, I see a rescue boat calling the world, Americans and me: Reconciliation with others and with God is still possible. Leave your stuff and get on the boat.

*Source and story of photo