Ignorance and Want – They Are Man’s Children 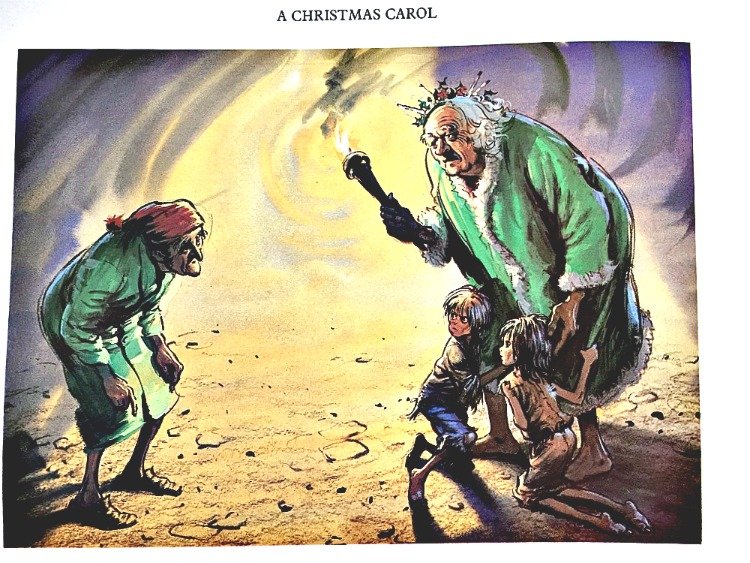 Children in the Present Remind Me of an Old Warning

When the Ghost of Christmas Present revealed the two children beneath his robes, Ignorance and Want, he showed Scrooge, and us, the harsh warning. I did not expect to see them so up close and personal.

Recently I saw two small children whose appearance and behavior prompted me to think of Dickens’ symbols. They were undersized, wiry, disheveled. Darting through and under racks of clothes, they gnawed at what looked like squishy fruit in a department store, crowded with shoppers.

Their mother, heavy with child  seemed distracted, even dazed. Apparently unwilling, or unable to corral them, she let them run. When I heard her speak, it was not English.

What flashed through my mind was not sympathy. Their presence annoyed and angered me. They were out of place, unable to behave, and probably had just qualified for welfare.

I could have nailed an audition for Scrooge.

I’d like to say I snapped out of it – but the memory of those kids and their mother hangs on – troubling me.

Then, I remember: Not too many years ago, my great grandmother got off the boat from Ireland – and the Irish were about as welcome in Baltimore as so many illegal aliens are today.

Forget placing blame; what do we do with and for 11 million people?

What does the church do?

Whoever opened the floodgates of illegal immigration – whoever is propping those gates open isn’t a problem I can solve. Nobody for whom I’ve voted could either.

While submitting to the rule of law sounds easy — like going on green and stopping on red — when it comes to immigration it’s more like approaching a blinking yellow light that causes havoc at a busy intersection. Yes, many immigrants entered the country by crossing the Mexican border illegally, but almost half of unauthorized immigrants arrived in this country legally and failed to comply with the terms of their visas. Soerens and Hwang write, “The reality … is that immigration today is not so simple, and most undocumented immigrants are undocumented not because they choose to remain undocumented, but because there is no process for them to enter legally or obtain legal status. . .

. . . As the debate over immigration policy continues, Christians will have legitimate differences of opinion as to how reform should be implemented. But if our political positions are steeped in the compassion, love, truth, and justice of our Heavenly Father, hopefully the watching world will see Him and not our fear. Susan Fikse, Immigation By Faith Online

33 ‘When a stranger resides with you in your land, you shall not do him wrong.34 The stranger who resides with you shall be to you as the native among you, and you shall love him as yourself, for you were aliens in the land of Egypt; I am the Lord your God. (Leviticus 19:33-34)

In the meantime, I must needs confront my own mixed up emotions; confess my snap judgments and pray, lest I am blind to Ignorance and Want – man’s children, who upset my Christmas spending spree. Oh, yes; may I be as willing to give as I am to pray.