It’s Better to ASK for Directions and Accept Help, Right? 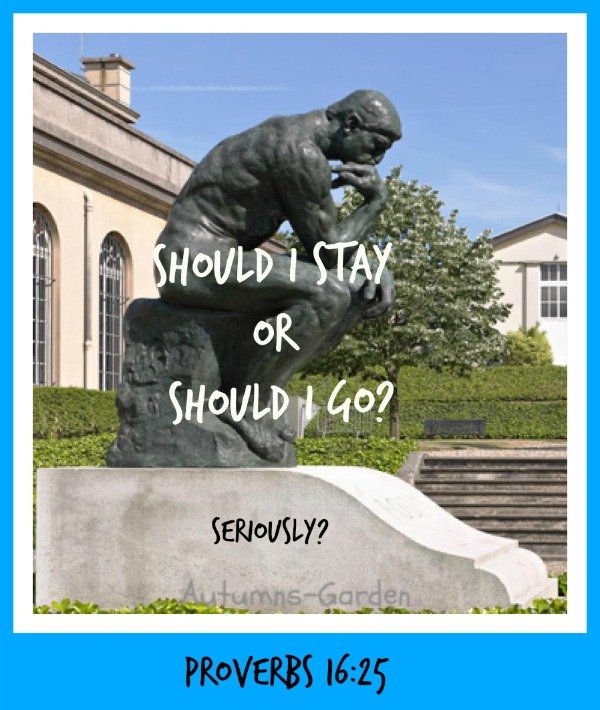 Should I Ask GOD for Directions?

Ask for Directions, if You Need a Way Out

I am not in Irma’s way but I am watching the weather updates as closely as if I were. And, some of the interviews and commentaries are unbearably hilarious.

Like on last night on CNN. The father of five children who was hunkering down last night, before the roads from the Keys to the mainland closed, told Don Lemon they hoped to ride out a storm that is bigger than the state of Florida!

Or, this morning, on Fox News. A father of two who was on the beach with his nervous kids, said since the information for storm surges was conflicting, he was putting his trust in a building that promises to withstand a Cat-5 storm.

Meanwhile authorities still plead: Get out now! You can replace your stuff, but not your lives, or the lives of those you love.

Some of us will not believe the warnings, even as trouble is battering down what we thought were secured hatches.   (See Isaiah 65)

But, as I shake my head at another’s folly, I hope I stay alert to my own propensity to pursue dead end paths.

God knows, I’ve trusted my instincts (read desires) when I should have paused because the yellow lights of commonsense and conventional wisdom, not to mention scriptural injunctions, were flashing. But I wanted what I wanted.

So how could that be wrong?

Let me count the ways.

The wonder of hindsight is not the 20/20/ view of how dumb I was. (And I was!) The wonder is the way the Lord led me through and out – beginning with my admission that my way was not a good way.

Yes, it felt a lot like choking – I was wrong is the hardest best use of three words I ever made!

Now is still good time to get over my infatuation with my own wisdom.

Some folks are wise and some are otherwise. ~ Tobias Smollett

Dear reader, if storms are barreling down on you and yours: pay attention to the warnings, and seek a way of escape. And if you don’t see one, ask for help.

My old friend Jeremiah described God’s Piling On the Pain to his secretary, Baruch. Given the wild fires in the west, and the hurricanes that are piling on our nations, it’s applicable, huh?

2-3 “These are the words of God, the God of Israel, to you, Baruch. You say, ‘These are bad times for me! It’s one thing after another. God is piling on the pain. I’m worn out and there’s no end in sight.’

4-5 “But God says, ‘Look around. What I’ve built I’m about to wreck, and what I’ve planted I’m about to rip up. And I’m doing it everywhere—all over the whole earth! So forget about making any big plans for yourself. Things are going to get worse before they get better. But don’t worry. I’ll keep you alive through the whole business.’” ~ Jeremiah 45

Is this weekend, a run-up to September 11, then a time to trust our luck, or ask for help?

Humbly sharing a Dr. John Piper’s Prayer in the Path of Hurricanes.