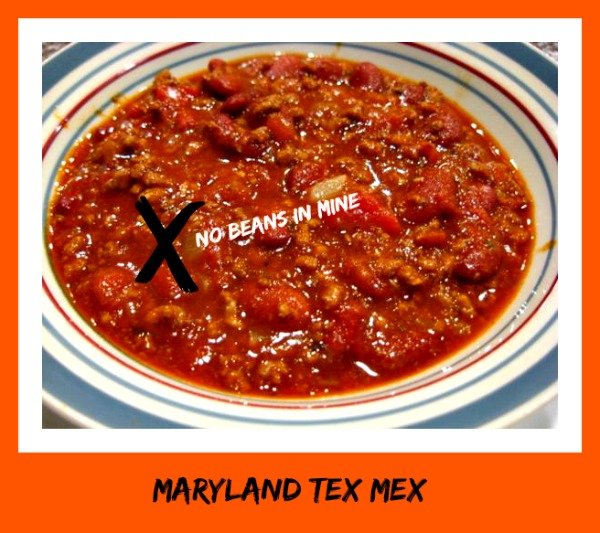 A Marylander shouldn’t make Texas chili in Texas – and I never did; but I can make it in Maryland. Actually I had to, because Doug and I were in a bit of withdrawal for that special kick chili is to the palate on a cold day. I could have checked a recipe – but that would have been out of character, and I already was in the grocery store when the craving overcame me.

So, after ten years of being able to buy delicious carryout chili, I resolved to make it, trying to remember what was in the little flavoring packets in Wick Fowler’s 2-Alarm chili.

The result wasn’t bad . . . but it needed a flavor I remembered loving in Texas chili but did not discern in this Maryland mixture. That’s a recurring, unsettling part of aging – something I can’t describe but know is missing haunts me like a proverbial ghost!

I Hope I Remember How to Make This Chili

Sauté and set aside

Sear and set aside

Combine the above with

Large can of whole tomatoes – but skipped tomato sauce and a bit of tomato paste. That may be what I missed tasting.

Wick Fowler I think added oregano and paprika – I didn’t have any. Could that be a flavor changer?

Brace yourself: A couple of teaspoons of brown sugar and a handful of frozen corn – no beans – Doug says, no beans. Maybe that was a flavor changer?

Serve with sour cream and cheese — chips, crackers or cornbread.

Note: the concoction improved overnight . . . refrigerated, of course and then reheated. Cooling it thoroughly meant I could skim off some of the fat that 80% beef generates.

I wonder what Old Bay would have contributed? (Just kidding.)

Here’s a link to a two-alarm recipe that might be interesting . . . especially if we have winter as cold as I remember it.