Me? I am Not a Collaborator! 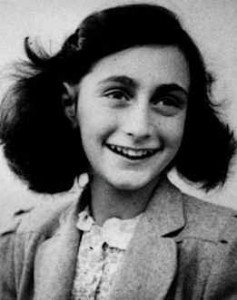 When I read The Diary of Anne Frank, I was a bit older than she was when she wrote; when I saw the movie, I was the age she was when she died. I knew her story was a real one – a life lived in unimaginable times (to me, living in America in the 1950’s and early ‘60’s.)

Thank God, that could never happen here! How could the German people not know what was being done to the Jews, and others?

I remembered what a man with whom I once worked said about his adolescence in Nazi Germany: Everyone joined the Hitler Junden (Hitler Youth) – to stay alive. When he told me that, I knew I had never experienced such pressure, and was glad I never would.

Growing older, reading, listening, watching, and seeing how easy it is to close one’s eyes, and turn from other people’s uncomfortable realities; feeling the very real pressure of falling in step with politically correct thinking – whether on the left or right, I began to wonder just how I would have survived in Germany in the 1930’s.

Those who stood up to the Third Reich were crushed under its power – that seemed to have ears in every home, on every street, in every place a dissenter might be.

When the Allied armies liberated the death camps, the ones where people like Anne Frank died, the leaders often made the townspeople “tour” them. 1

Americans and the world now have been given a new tour to take. No power can force us to watch the videos, the way we did the Germans. Indeed many of us look away and deny theses recorded conversations are what they are. A collection of undercover videos reveals Planned Parenthood employees negotiating to sell aborted fetuses.  True or false?

I can’t watch them, to be honest. I hesitate to believe my fellow citizens are capable of such inhumanity. I know many friends and family support a woman’s right to choose – but do we not know what “choice” means for the baby?

On our trip back to Texas, we are listening to All the Light We Cannot See by Anthony Doerr, the Pulitzer Prize winner that skillfully describes the interior lives of German and French people negotiating the times in which they live, prior to and during World War II in Germany and France.

Mr. Doerr writes of their thoughts, dreams, fears, and deeds during uncertain, horrifying times. In doing so, he opens a window so I can see how hard it is to stand against evil – to say, I will not, when commanded to harm another human being.

One character sums up guilt, then and now: “Doing nothing is as good as collaborating.”

Isaiah said God  holds out His hands — asking that we return — but we in our pride say No way.

The recently released video tapes are convicting evidence our world has no excuse when asked why didn’t rescue those led to the slaughter.

I am hoping and praying that many may see and return to God and turn from their opinions that abortion is ok.