Redeeming a Lost Cause

Distilling Current Events into a Cup of Cold Water

Our flowerbeds look like a lost cause. So did a painting I tried to finish. It was a lost cause, not worth redeeming.

I was about to toss it, when I remembered the encouragement my former teacher and friend, Tori Pendergrass, offered when I was about to give up all hope on a project: No, no – stand away from the painting and let’s see what we can do.

There were no lost causes in her class!

Somehow, she always saw something worth redeeming in my work; in all the students’ work in that Monday night class.

So, channeling my inner Tori, I painted over the offending tree – it’s going to be tricky. But, I will do what I can to redeem the canvas, time, and imagination I’ve spent so far.

This conviction to try and repair a project came the night I heard about the conclusion of a heart-breaking trial of a Dallas police officer who was convicted of murdering a man she mistakenly thought was an intruder in her apartment. Here’s a link. 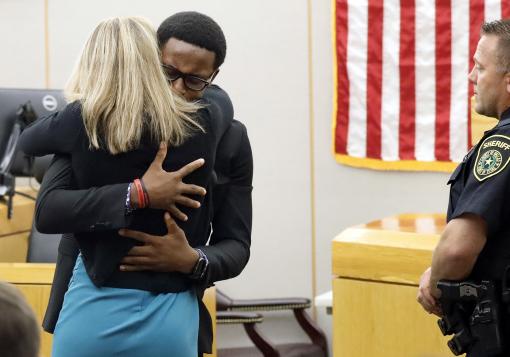 Redeeming a Lost Cause*

As I read of her conviction, though, what followed were the redemptive, redeeming words and gestures of the family AND the trial judge. I hope you can see and hear what redeeming work looks like in  another link  from the Dallas Morning News:

The prosecution had asked for 28 years — the age Botham [the victim] would have been on Sunday had Guyger [the officer] not shot him last September when she was off-duty but still in her police uniform.

Instead, Jean [his brother] told Guyger that he wanted what Botham would have wanted.

“I think giving your life to Christ would be the best thing that Botham would want for you,” he told her. “I love you as a person, and I don’t wish anything bad on you.”

He told Guyger that he didn’t even want her to go to prison.

And then the judge, Judge Tammy Kemp,

. . . walked over in front of the defense table where Guyger still sat.

Kemp crouched in front of Guyger, still wearing her black robe and gave her a Bible. Those watching on the internet could see the judge and Guyger. But they couldn’t hear what happened.

They spoke quietly, with Guyger in tears and Kemp punctuated the conversation by gesturing at the Bible and saying, “Read this.”

Guyger leaped up to hug Kemp. The judge paused for a second, unsure of what to do.

Then, Tammy Kemp embraced Guyger, who whispered in her ear.

Only the judge’s responses were heard: “Ma’am, it’s not because I am good. It’s because I believe in Christ. None of us are worthy.”

Attorneys, bailiffs and journalists wiped away tears as they watched Jean and Guyger hug and as then leaned in to hear Kemp’s words.  A box of tissues was passed around.

And that, chances are, they never would again.

In a way, the reports of this event mirror my messed up painting.

Can all the pain, past, present and future be reworked – redeemed – into something of value? A human life, wrongfully cut short, how can that ever be redeemed? I don’t know. But, I do know that in the midst of this terrible pain, I saw people who know the only Redeemer share their hope and comfort, to a disgraced former police officer, offering a cup of cold water to us all. She was not a lost cause.

Some news, even wrapped up in  sorrow, is redeemable and too good not to share.