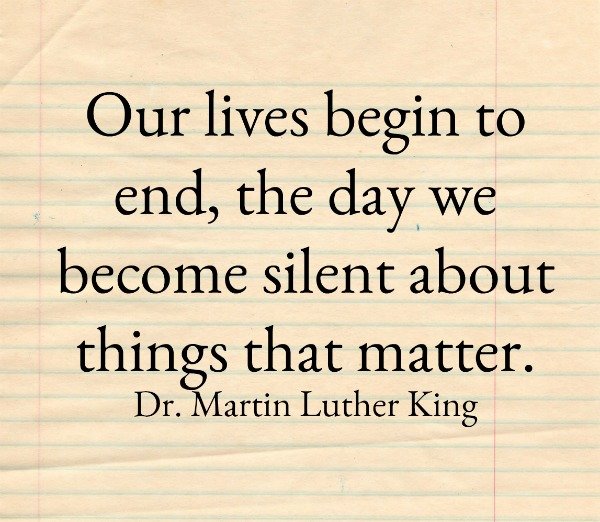 A Bubble Need Not a Prison

Thank God! I grew up in a bubble – a community of well-built houses that were the American dream of mid-century America. Stoneleigh in Baltimore County, had its own elementary school and swimming pool, and dozens of tree lined streets, generous lots, and cozy houses.

But, African Americans did not live in Stoneleigh.

Eventually, television news informed me of other neighborhoods – usually in the south; places where white people mistreated black people. I did not realize how that mistreatment looked and felt in Baltimore.

Dr. Martin Luther King, and the people he inspired to do something about racial inequality shook me up, too. His voice, along with President Kennedy’s, and the nightly news told me Americans could hurt and hate other Americans because of their skin color, and their own understanding of history and ignorance of God’s word.

Change from the Inside May Take Longer

Unfortunately, it took me longer to understand that include me, too.

In my bubble, safe from the daily assaults and insults with which black citizens coped, I thought changing and enforcing laws would end the cruelty; my father, whose birthday was the same as Dr. King’s, told me, No; legislation will not change people’s hearts.

He was right . . . but I thank God for Dr. King and the many whom he inspired to change the laws that oppressed African Americans.

I grieve the price he and others had to pay to shake this nation up, and make us look at our history, examine our conscience, and see how we treat people, created in God’s image all, but whose skin, hair and facial features differ from white people’s.

For all the steps out of the bubbles that imprisoned us, we have further to go, especially in the church. Maybe our grandson who was also born on Dr. King’s birthdays, and his generation, will fulfill Dr. King’s dream, the Lord willing.

It’s worth hearing again Dr. King proclaim what is not impossible dream for God who will change us. But, first, we must ask, and examine our words, thoughts and deeds – and that’s a real bubble buster when God shows us what has to go. The mercy is He’s every ready to clean house!

Plus we must read our nation’s history, from more than one source, and become willing to learn and change. Crude speech and vicious behavior that we spot so easily in other people’s stories are dangerous seeds in our own hearts. And in the church.

Here’s a start: How to Care about Social Justice without Losing the Gospel;

Nine Things to Know About the Mississippi Burning Murders. and