When the lights go out suddenly, a wee bit of panic overtakes me. Just before crawling into bed the other night everything in the bedroom went dark.

Doug had just set the temperature down a bit. Did that blow the circuit? Given our recent electrical problems, I thought more interior wiring was faulty.

Down to the basement we trudged and discovered electricity was flowing to one side of the house, but not the other; some appliances were on, others not.

What in the world?

We discovered, through our son-in-law’s investigation, the transformer, perched on a pole in the far end of our yard, was expiring. So the power to our house was halved, transmitting a kind of warning to look for trouble. (And that’s about the extent of my electrical expertise.)

When the repair crew arrived, they cut all the power to the house, and they also cut large ruts in our new grass, bringing their cherry picker-repair trunk close enough to assess the situation.

As I lay in the dark still house, watching emergency lights whirl around the ceiling, the panic passed. We knew the cause; we had people who were helping – the odds of restoration of power were good. Absolutely nothing to do, except accept the new normal.

Lying still – refusing to go through the scary gates that the proposition What if opened was a work-out, though. A few “what-ifs” niggled me, shaking me awake.

What was I going to do? Clamber up the utility poll to lend a hand?

No, lying still, accepting what I could not change, and having the wisdom not to try to detail manage the workmen was a small taste of serenity.

Exactly what did I think I could add to the present reality by worrying?

Even in an autumn’s garden I still wrestle with duties, obligations and responsibilities; trying to manage what is not mine to manage, I can wear myself out and lose my charm. So, going from buzzing around with lights and wifi on, to darkness and quiet felt like being pinned by bigger wrestler.

Circumstances wholly beyond my control forced me to be still, and accept life on the terms it was offering that night.

I fell asleep and awakened to electric lights glaring and an early morning traffic report blaring – indicating that a new transformer was sending out the power I need to get busy and take on the day. The memory of falling asleep in dark stillness made me wistful for the previous night’s peace. 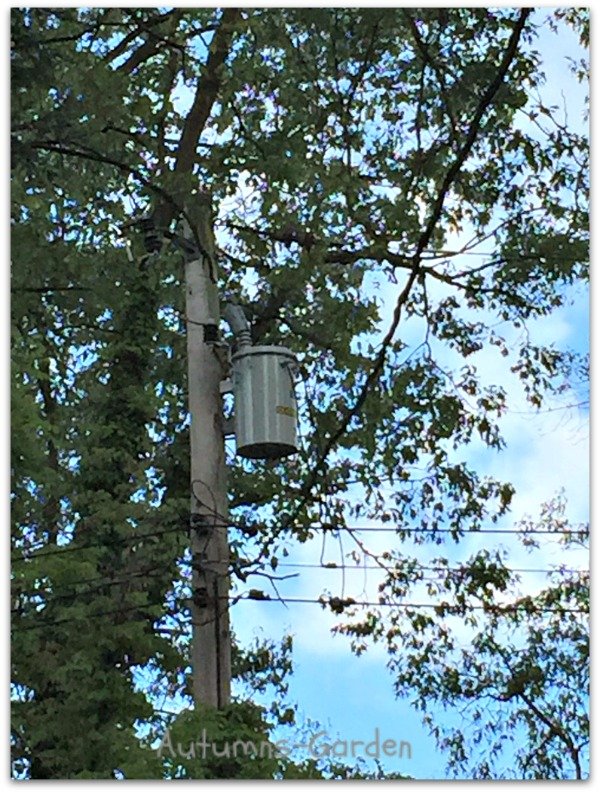