An Anniversary of An Assassination

Repeating myself on the 49th Anniversary of an assassination that changed American history  and me. 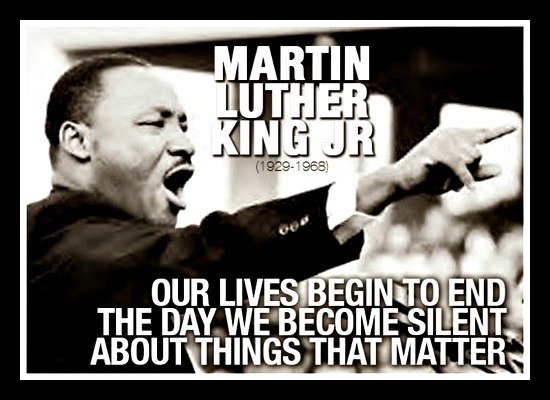 on the 49th Anniversary

On this day in 1968, Dr. Martin Luther King’s life ended – shot by an assassin. He and others throughout the 1960’s forced Americans to look at how we treated some of our citizens.  He and they showed us what prejudice looks like. What I saw shocked me – I had never seen such cruelty!

When I visited my grandmother in South Carolina, she introduced me to a little girl who was my age, who came to play. I was oblivious to how child’s play could wound a little soul, hers and mine: I did not appreciate the insult that she was good enough to play with me on my grandmother’s front porch – but not good enough to come into the house.  Nor, did I see how insidiously the unspoken lesson of racial, ethnic and religious differentiation poisoned my perceptions of people.

Dr. King’s speeches – compressed into sound bites on the evening news – gnawed at my conscience.  The pictures of whites reacting to Negroes, dignified and determined to possess what the United States Constitution guaranteed them, galvanized me to rethink what I believed about people – to a degree.  My generation would eliminate racism!

So, I was stunned when, in the spring of 1968, news of Dr. King’s assassination filtered through the campus at College Park, Md. Many students met on the mall, expressing our grief by locking arms and singing, “We Shall Overcome.”

But we were too late: that era was over – perhaps for good.

Dr. King’s assassination blew the lid off the composure of many African Americans, and they rioted – some for nefarious reasons – but many because they lost a beloved, revered leader. The riots in Washington, D.C., nine or ten miles from where I lived shocked me. (Washington D.C. Riots) Whole sections of the city went up in smoke, and their scar remained for several decades.  Every time we drove through Northeast DC, vacant lots testified to what overt and covert racism and violence spawns.

I did not attend any church then, so I cannot say what local assemblies were taught. A few years later, I heard one Episcopal priest preach, he urged the congregants to get involved in their community, and consider taking a black person to lunch.  Oh, if only racial reconciliation were so simple!

Prejudices subsist in people’s imagination long after they have been destroyed by their experience. ~Ernest Dimnet

Another twenty years would pass before some Christians helped me see discrimination through the lens of Scripture.  Unfortunately, 11:00 on Sunday mornings still testifies too clearly of deep divides in America. (Sunday Morning’s Segregation )

Discrimination is a survival tool that too quickly becomes a weapon, if the reasons for making the distinctions go against God’s word, or distort it to justify racism.  (49 Verses on Slavery)

Too many preachers who urged making racial distinctions were dangerously wrong. (R. L. Dabney, for example) Dr. King, though, spoke of a coming blessed discrimination that still convicts me:

“I have a dream that my four little children will one day live in a nation where they will not be judged by the color of their skin, but by the content of their character.” (Source)

Such an ability to [rightly] judge another’s character comes from being willing to have our own character judged. (Matthew 7:1-2) We must be willing to look at what prompts us to discriminate – to have our personal attitudes and habits examined, beginning with the confession of our prejudices, as Edward R. Murrow urged:

“Everyone is a prisoner of his own experiences. No one can eliminate prejudices — just recognize them.”

Search me O God – and know my thoughts, see if I harbor hatred for anyone created in Your image.  Cast it out! And fill me with the compassion and truth that are the Hallmarks of Your Son and my Savior. (Psalm 139:23-24; Luke 6-8)

And I ask You to forgive me for hurting a little girl named Annie Lou.