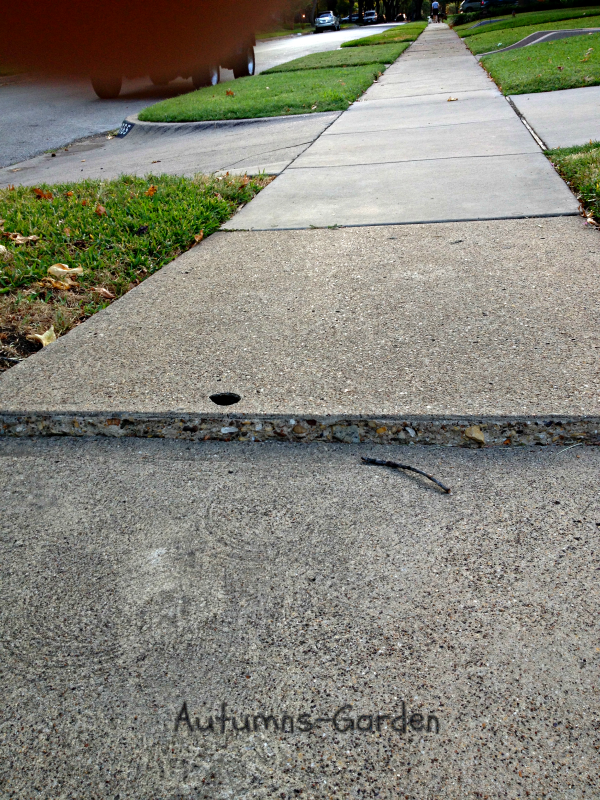 No, I am not in great shape – but I’m in good shape for the shape I’m in. I could be in better shape if I reduced white stuff in my meals . . . reduced fat . . . and made walking a priority. 1 Now, we are walking — switching to earlier AM jaunts because of the hot weather – but they aren’t as rigorous as they once were.

Walking has been a mainstay in my life. I once walked everywhere – especially when I was in school, and then living in Washington. Cabs were cheap – so were buses, and yes, I used them. But I walked.

When we moved to Annapolis, and I became a tour guide, I walked folks around the downtown, and through the Naval Academy in ninety minutes. And when we lived downtown Annapolis, I kept up the pace solo. Then we moved to Severna Park, and I slacked off for a spell until I started enjoying the Bike Trail on foot.

In the ten years we have been in Texas, I have also taken energizing, and enjoyable walks through three different neighborhoods, each with unique vistas – but none compares to the early morning light on the Annapolis Harbor, or the Severn River.

My walks now are wholly in residential areas – no shops, restaurants, or bars, and the attending smells. No, here, I see yardmen, or construction workers. Old houses are torn down in a day, and large frames of new McMansions appear seemingly overnight. And lots of dogs exercising their masters.

Over the years, danger was rarely a factor; here, in Texas, danger lurks because of my progressive bifocal lens and uneven pavements. Distances are wee bit distorted, so up heaved blocks of pavements are not as sharply defined . . . Stumbled, I have, several times; tumbled a few times, too, I have as well. Sobered I am at the prospect falls promise!

Fear mixed up with caution rarely troubled my stride on former walks; now I realize how costly it might be to fall. When I heard my mother say, “Watch where you are going!” or, when I cautioned our own kids, “Watch your step!” I never thought of broken bones.

Have you taken a fall recently, gentle reader? Are afraid of what may unexpectedly trip you?

So, I look down a lot more.

I still see interesting things, though. Like the tangled roots of an old live oak. And the concrete tripping point of which I steer clear. 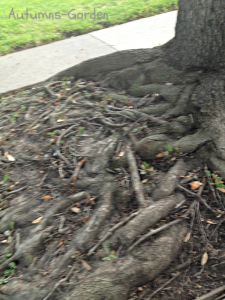 Walking is an exercise; so is writing. It is a way of understanding – maybe even untangling — gnarled roots of happiness and heartache. It is also a way of examining more closely obvious stumbling blocks that I never saw until they tripped me up.

Walking is good for solving problems — it’s like the feet are little psychiatrists. ~Terri Guillemets

Holding the unseen hands of One who can catch me, I am praying He has each of the hearts I so love firmly in His grip, for these are days of unexpected falls for so many.  (Psalm 37:24)

After a day’s walk everything has twice its usual value. ~George Macauley Trevelyan

1 Add Seven Years to My Life