What Happened to Sophie Wilder by Christopher Beha 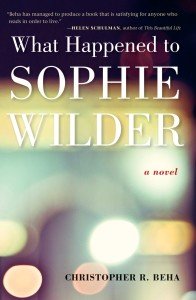 On one level, the novel reminds me of The Great Gatsby – for it is an insightful encapsulation of despair and depravity – and Mr. Beha is an erudite and elegant writer whose dialogue and descriptions capture the world-weariness of many young people. As Scott Fitzgerald chronicled the unrestrained behavior of the 1920’s in his novel, Mr. Beha has revealed what normlessness – anomie – looks like in this generation of 20-somethings.

His characters, especially Sophie, are swept along in emotional floods, some of their own making, many because of others’ making. She is an orphan, her lover, Charlie Blakeman, has no father, and her husband has no mother. And everybody sleeps around. Alcohol and drug use abound – and eventually overwhelm Sophie’s ability to stay afloat after her conversion to Roman Catholicism. Yet, religion makes her a more repellent character than those who have no religion.

Mr. Beha describes how Sophie’s life changed by becoming a Roman Catholic; indeed, he describes the mystery of a soul-stirring under the power of the Holy Spirit.

The heavens show her the reality of God, her conscience, and her need. (Page 121, electronic book) But an occupying force is not personal – nor does it ever help her in her need. Perhaps this is connected to the author’s views of religion expressed in his book, The Whole Five Feet: What the Great Books Taught Me About Life, Death, and Pretty Much Everything Else.

I selected this book because of the recommendation by Marvin Olasky, in WORLD Magazine, who said it was worth a slow read. (review) The novel has praiseworthy elements, namely Mr. Beha’s use of English; but it has problems – which may be the grist for book club discussion. However, the ending seems as if Mr. Beha got tired of the pain – and stopped the story. Mr. Beha showed us the world he sees – through the eyes of two writers that a large majority of Americans see. Its ending is as grim as Gatsby floating in his pool, and God is as absent in Mr. Beha’s world as He was in Mr. Fitzgerald’s.