Why I Avoid CREPES! 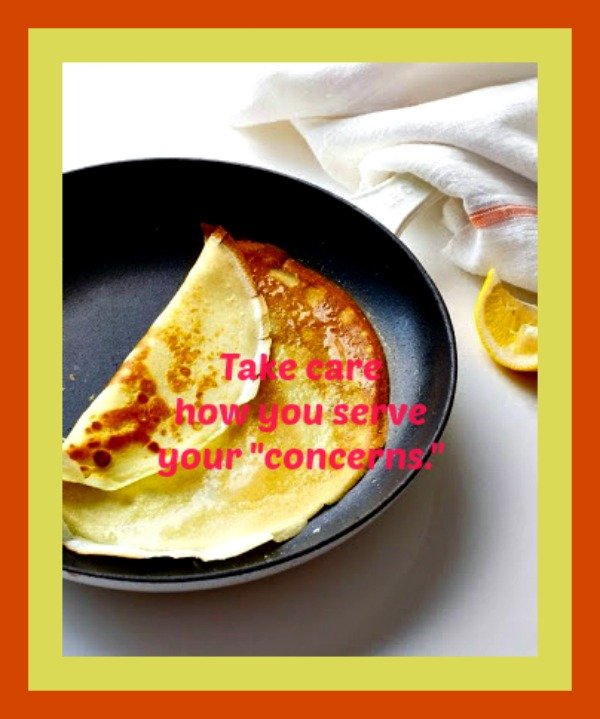 Crepes as a tutorial

It’s not their calories!

Many years ago, I met a friend at a popular creperie in downtown Annapolis. There, I received an object lesson that still goes off like a smoke alarm in a grease fire every time I wonder if I should say something to a friend about something they are doing that bugs me.  And when I see a crepe, back in time I go to a Friday night in a crowded restaurant.

That Friday night my friend called and said we had to talk, could I meet her right now?  The urgency in her voice made me risk getting out on an icy January night, and leave two sick children in my willing husband’s care.  I came because I thought she wanted to talk about stuff that might have been weighing her down.

We settled into our seats in one of the town’s most popular and crowded restaurants. So many conversations swirled around us, it was hard to hear, but I waited for her to open the conversation.

Surprise, then mortification overwhelmed me, however, when she declared in a loud voice that she could no longer hide her concern for me – she knew I was in deep emotional water, and I was about to do something really stupid.

The diners on either side of us ceased chatting and eating, and I was aware of their uncomfortable silence.

Months of memories of our family’s recent troubles, troubles I thought I had kept private, swirled in my brain, choking off any kind of conversation. My friend saw me sinking, but her judgment didn’t help

For several minutes, all I could do was stammer, “You are wrong – you are wrong,”

She disagreed, at full volume; the lecture continued. I heard only a fraction, some of which sounded true – but my tears drowned my hearing.

After several more paralyzing moments, I struggled out of the narrow booth and table —and I headed for the door.

Eyes stinging – and gulping in wintry air, I made it to my car, and drove home, followed by an Annapolis police car. The officers noticed I was driving without lights . . . Oh great! When Doug met me at the door, they decided to give me a pass.

Then I tried to recall what she said; but, all I remembered was, you are doing everything wrong – and you are going to screw-up big time.

Fast forward a few more years, and she called, again asking me to meet her and I accepted, warily. We had not talked since that night. So, at another French restaurant, but one whose tables were more generously spaced, she explained why she did what she did.  It was for my own good – and she was glad she’d done it – and one day I would thank her. I tried telling her how I remembered the evening.  It didn’t go well.  I could not admit my faults, nor would she concede her errors.

Given time, though, and being shown a better way to engage people who are upsetting me, I can see some plusses coming from the fiasco at the crepe house.

Go privately, after prayer, and never without compassion and awareness of the surroundings!

Did I need a reality check back then? Oh Yes!  I still don’t handle stress well. The Lord only knows what I projected to this woman thirty years ago!

Would I have heard her concern more clearly if we were sitting alone, without half of downtown Annapolis listening?  I hope I would have. But the human heart is funny thing. Prideful and Foolish are still adjectives that can be used to describe me, and deafen me when I need to listen.

I know now that going to another person is the how we begin to make peace or bring healing.

So, while I am grateful my friend showed me what public chastisement feels like, there is a better way: a private offer to share a burden. The follow-up meeting taught me that I will never be so right that I don’t own a part of the pain that can spring up and separate friends, even those with the best motives.

Christ taught His disciples how to have difficult conversations, when others are wronging or worrying us. (Matthew 18:15; Galatians 6:1-2) Speaking the truth, in love may be the lifeline a frantic friend needs.

If you ever need to talk to me, about your concerns for me, I will listen – but not in a restaurant that serves crepes.